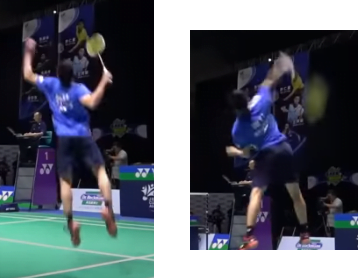 its Goh V shem, i watched a compilation video of his forehand smash, everytime he wants to hit a smash shot, he always set the racket face to the side before hitting.

Sent from my iPhone using Tapatalk

okay, I just watched a video.. and I see it looks like any smash where he has time for a full swing, he’s doing that..

and it’s working for him, because even though he starts in that position(pic to the left), at some point after, he gets his racket to this kind of position, (pic to the right)

He can do that so it’s fine and great.

But many people not at that level, if they have their racket face out to start with, then they’ll swing their racket round at the shuttle. or do something funny..

So racket preparations i’ve heard taught are more facing the net, or a bit closed inward.. and not open to the extreme out very to the side like he has it..

But it’s a really interesting finding you made there..

Of course also.. he has his body really turned well, and is still able to then turn into it..

Nobody would ever say he was doing it wrong.. And if you held your racket in the preparation position that he is, and somebody said that was wrong, then you can show them the images of that guy, and if they agree you’re holding it like he is, then they couldn’t say it was wrong. They could say they don’t coach it like that, but they couldn’t say it was wrong! Rule number 1 in showing that something is good technique is finding a top international player doing it! Those types of people set the standard.