↓
Home→Badminton→Experiment: How do you want to deform your racket? Introduction
As stringers, we all want to know how to do the best job. Some top stringers have made some comments on Youtube about how they are instructed to string by Yonex. Not all of them seem to do the same, still, so this sparked some discussion. We decided to “science the sh*t out of it” and give it a go.

Question
The question we all wish to answer is: how to best string a badminton racket?

This has many factors and can be open to interpretation, as it depends on what people think is (most) important: Maintaining shape of racket head, keeping tension, the feel and characteristics of the stringbed, preventing racket breakage, player performance, etc. And there are many different ways to string a racket.

When researching we found that the most important factor is retaining the original shape of the racket head. As we already decided we’d string bottom up (see why in the discussion), we wanted to test the different main/cross ratios and their results on the racket head shape. The following different ratios are often used:

Assumption made for this experiment is: The closer a strung racket’s shape is and stays to the original shape, the better the feel and performance of the racket stays.

Method
Stringing methods
In our test we will string rackets with following specific Main/Cross tension methods:

The Yonex method is close to +2lbs method in our testrange, we decided not to include it in this experiment.

All rackets will be strung:

Measuring
We measure the racket shape in different timeframes:

The racket is measured in four locations, on the inside of the frame, on top of grommet:

The averages of the deformations are shown. Beneath you can find the individual results per racket. Also, there are some test results of some other rackets as a bonus. The extra rackets are all strung with the square + 6 o’clock adjustment only.

Overall
All rackets have some sort of deformation, in a specific egg-like pattern:

Deformation around 0.5mm was considered good, around 1mm decent, and around 1.5mm poor.

We looked at the timeframe After Playing most, as that is the time the racket is used the most. But you can see the racket settles between stringing and playing up to about 0.5mm in most measure points.

Square (without 6 o’clock adjustment)
The length settles in close to original, but the width is very egg shaped, with the bottom expanding by 1mm and the middle and top getting 1mm and 1.8mm smaller respectively.

Square with 6 o’clock adjustment
Length and middle width are similar to square, but the low and top are a lot better at 0.5mm and 1.3mm respectively. We are missing a datapoint for After playing for the AX99 here and used the 48 measurement for average instead.

Yonex method (+10% on crosses, last 5 crosses +0%)
Great scores on length and lower width deformation, but the middle and top are getting very small at 1.5mm (worst middle score) and 1.8mm respectively. 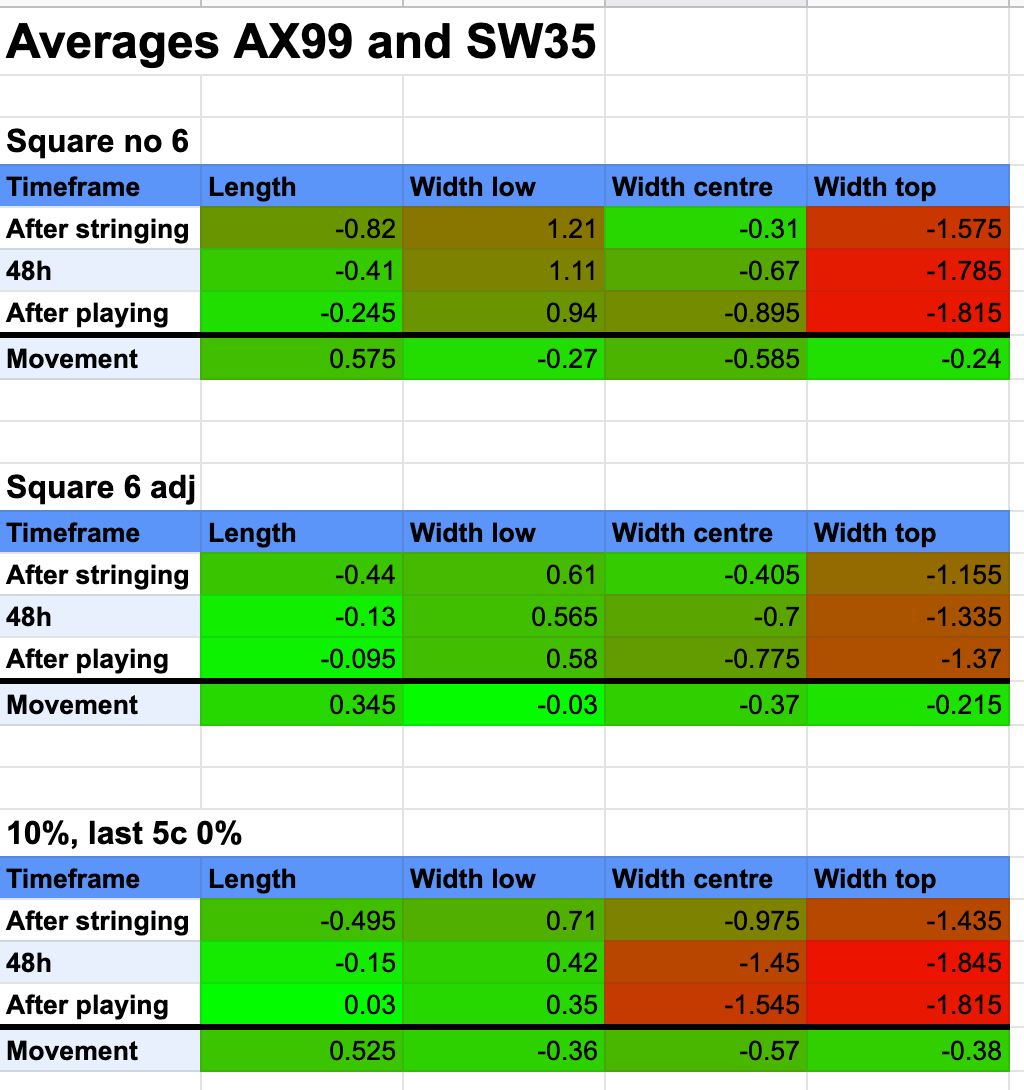 Conclusions
Our main focus was to test which main/cross ratio keeps the racket head shape closest to the original. The test was limited to three different stringing methods on two different racket models and tracked the deformation up until after an hour of playing, when the racket should be settled. In the Discussion we will list some other ratios and factors to be discussed and possibly researched further.

Findings
The data suggest the square with 6 o’clock adjustment method scores better in retaining the overall shape of the racket, with the least deformation of tested methods. While the Yonex 10% method had great length and bottom scores, it had the biggest shape deformation at the middle and top. So it is quite interesting why Yonex recommends the +10% on the crosses. The square had a very THICC bottom and thin top.

The results seem to confirm what many of us already think. Which is, that there is no specific need for extra pounds on the crosses. In the discussion we will give our thoughts of why that might be.

Side note: As seen on the extra results, it seems the compact frame rackets (Duora ZS and Nanoflare 800) react kinda strange on square + 6 o’clock adjustment. They become quite a bit shorter and the bottom part expands more than other rackets, especially on the Nanoflare 800. 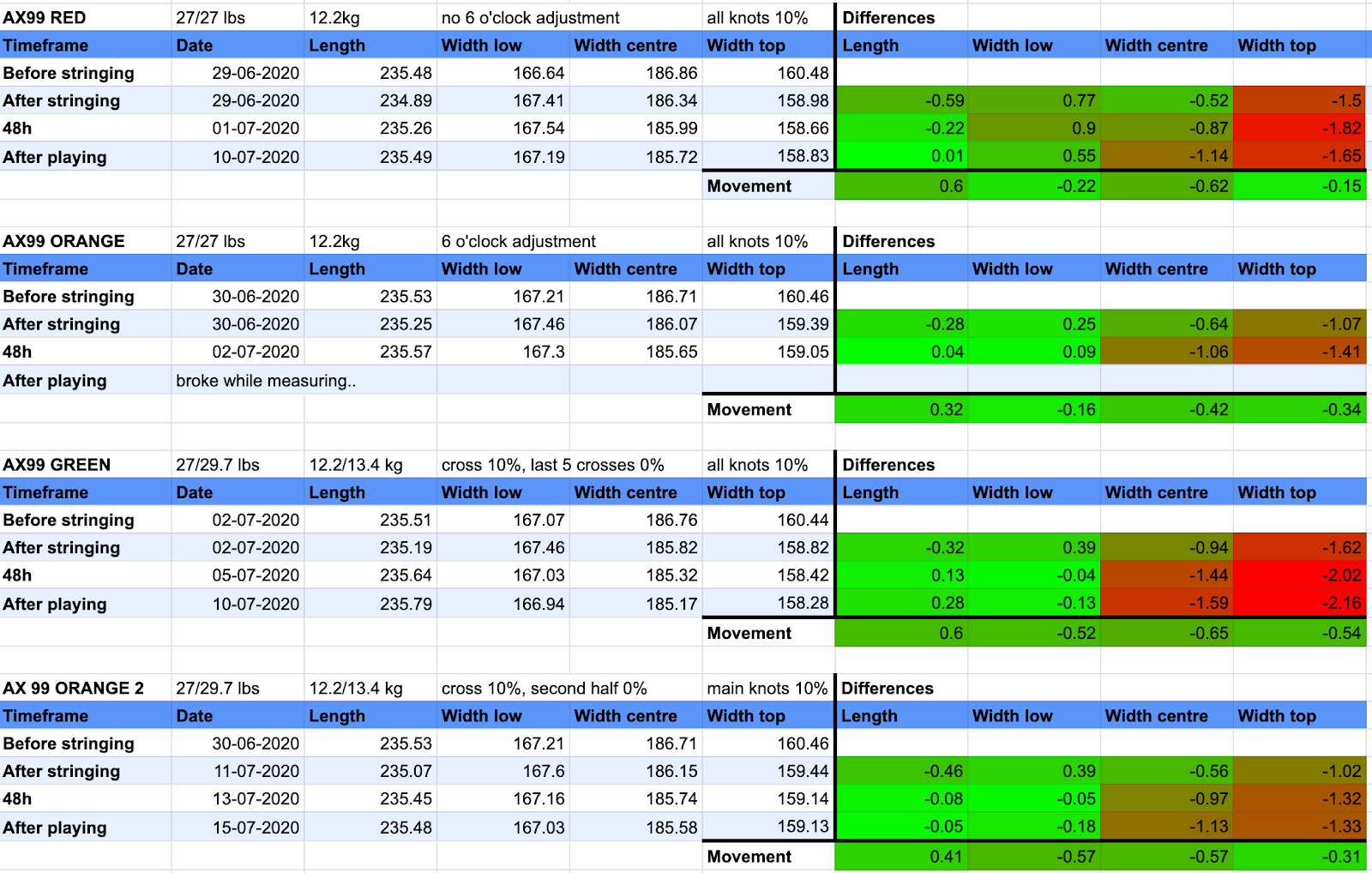 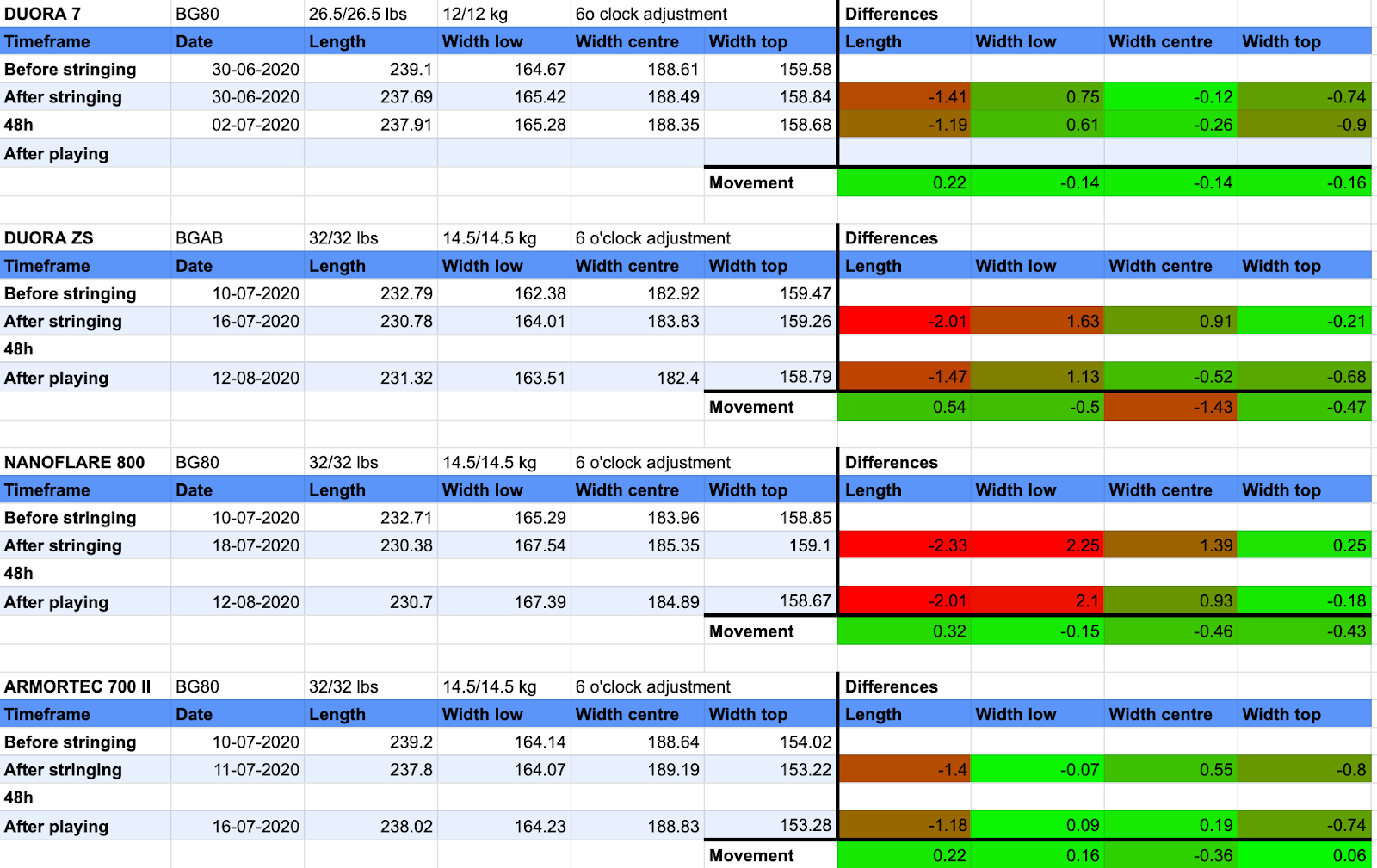 Well, that was a long post. What do you guys think of our findings?