For the second straight day at the World Tour Finals, Korean shuttlers went a perfect 5 for 5, with Choi Sol Gyu and Seo Seung Jae becoming the first of 5 to score the win that would put them atop their group and into the semi-finals. 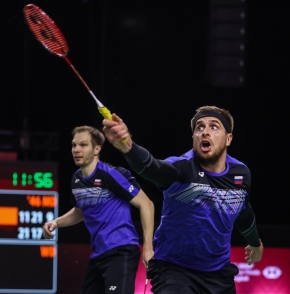 Korea’s Choi Sol Gyu and Seo Seung Jae started this year’s World Tour Finals with their backs against the wall.  They managed to lose the very first match of the tournament and were then facing the prospects of need to beat the current World Champions and the 2016 All England winners.

To this, add that Choi Sol Gyu had been struggling with a deadly trifecta of loose serves, netted serves, and service fault calls, as well as worries that Seo Seung Jae would be struggling with fatigue after playing to the weekend in both disciplines, three weeks running.

But Choi and Seo rose to the occasion on Friday in Bangkok against Vladimir Ivanov and Ivan Sozonov.  Both of the Koreans were smashing hard and with variety and hunting the shuttle at the net.  In the third game, they had difficulty avoiding lifting to Vladimir Ivanov’s perilous smash but the other two games saw the Koreans keeping the shuttle low or moving Ivanov around on the backcourt.

Things became very tense halfway through the deciding game, when the Russians erased most of their opponents’ 12-8 lead; however, Choi finally got his serve under control long enough for the Koreans to stay ahead by a nose and they took it 21-16 to book their spot in the semi-finals. 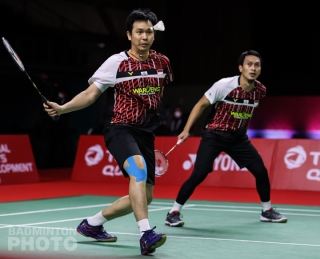 “This is the first time we are playing them,” said Choi Sol Gyu after the win, “but they are a strong team with good drive.  In the second game we made many mistakes but we were able to recover in the third game and win the match. Though we are happy about getting into the semi-finals, our performance was not satisfactory today so we will go back and think about it more and be prepared for the next match.”

Aaron Chia and Soh Wooi Yik not only started the week riding high from a win over the Koreans, but they got a great start to their decisive 3rd group stage match, against Hendra Setiawan and Mohammad Ahsan.  The Malaysians came back from 8-13 down in the opener to win it 21-18 before the Indonesians took charge.  As the match wound down, the rallies got shorter as the Indonesians took control of the first three shots and in the final points, both Setiawan and Ahsan injected some extra zip into their smashes to take the three-time World Champions over the finish line.

The Indonesian win meant that the Korean pair would top the group, as both pairs finished with two wins and one loss but the Koreans had beaten Ahsan and Setiawan on Thursday. 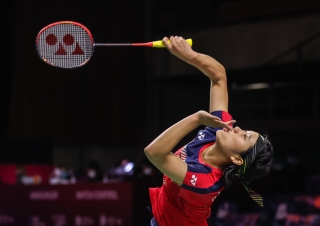 3rd time lucky for An

For the third straight week, An Se Young had to take on Carolina Marin of Spain.  This time, there was far less pressure than in the last two weekends of semi-final encounters, as both players had already clinched their berth in the final four.  In fact, they knew that regardless of the outcome, there was a 50% chance that they would be back on court in the next 24 hours to do it all again against the same opponent.

While An Se Young really had something to prove on Friday, after 3 straight losses to the Rio gold medallist, Carolina Marin had, with those three decisive victories, already proven her point: that she was fully capable of beating the youngster who had kept her from the 2019 French Open title. 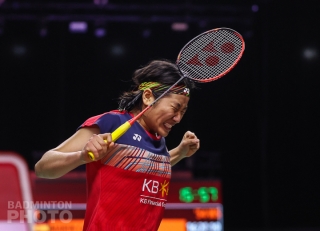 Marin was far less vocal as she continually foiled An’s every attempt to open up a comfortable lead.  But that didn’t mean she was any easier to beat.  The European played completely without nerves but she brought all the speed and power that she always brings to the match and An had to bring her A game to stay ahead.

The Korean was more focussed and consistent when it got down to the wire and she closed it out on her second match point opportunity to cement her place at the top of Group A.

“I’m really happy as I have shed a lot of tears here,” said An Se Young after the match.  “It’s a good feeling and I can’t describe it in words.  It feels like I am able to respond to those cheering for me, and I’m happy with that.

“Rather than focusing on winning, there were many things I have learnt from Marin and I adapted to those things as I was playing the match. Marin has power and speed which kept coming out during the first and second match, which I didn’t catch. Today I kept on trying to catch it until the end, and focused on each shot one by one.” 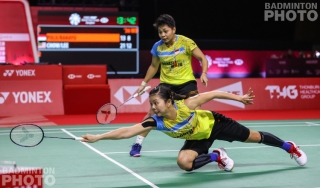 While both of the finalists from the Toyota Thailand Open picked up the wins in the matches they were favoured in, women’s doubles Group A saw an unexpected turn of events in the last match of the round-robin stage.

Lee So Hee and Shin Seung Chan had earlier in the day clinched their spot in the semi-finals but after losing to top-seeded Greysia Polii / Apriyani Rahayu on the first day, they were probably expecting to be playing second fiddle in the group.

But Malaysia’s Chow Mei Kuan and Lee Meng Yean were having nothing of it.  They played stellar defence and Chow, especially, showed uncanny anticipation at the front court to keep the Indonesians under constant pressure. 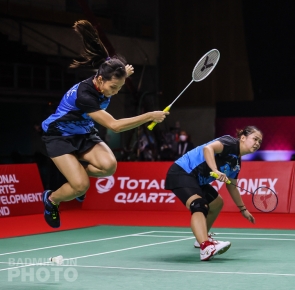 The Indonesians went in needing to win the match to top the group, but only needing to win one game to advance to the semi-finals.  In the end, though, Chow and Lee denied the top seeds even that.  The Malaysians won in straight games to take second  place in Group A and await the draw for their semi-final opponents.

“Today we performed well and kept our opponents under pressure,” said Chow Mei Kuan.  We didn’t make easy mistakes and we played things point-by-point to beat them.

“It was a long rally game and we focused on the shuttle. We didn’t think about winning or losing, we just wanted to pressure them on our smashes and rotation.” 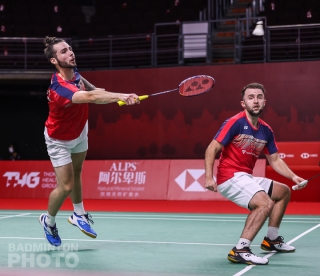 Lee Meng Yean added, “Our opponents are very good in defence.  We allowed them to attack first and counterattack back and that’s the way we scored some points. We did well in the first game, we held things tight and continued to pressure them. Our confidence was high after the first game win.  I think we need to work on our mental game for the semi-finals. There are no 100 per cent certainties. Our spirit is to never give up.”

One of the biggest ranking gaps on Friday was bridged by world #34 Ben Lane and Sean Vendy.  To their straight-game win over their Olympic bronze medal-winning compatriots on Wednesday, they added an upset over world #15 Malaysians Ong Yew Sin / Teo Ee Yi.

“We were enjoying ourselves for sure,” said Sean Vendy after the win.  “It’s probably one of the biggest matches of our careers so far.  Whoever won this match today would go through to the semi-finals.  We know we might be the underdogs on paper, but we’ve been playing well throughout these last three weeks and we were confident going into this match.  It’s hard for me to put into words how I’m feeling right now, we’ve never done this well in such a big tournament. We’ll give it our all tomorrow.” 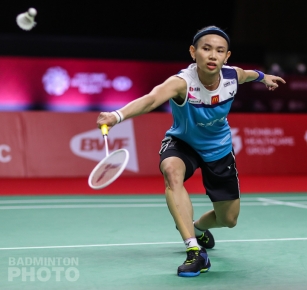 Coming up: The semi-finals

The English pair now have the daunting task of playing Chinese Taipei’s Lee Yang and Wang Chi Lin.  They already played each other on Thursday but the semi-final draw results yielded men’s doubles, men’s singles and women’s doubles all repeating match-ups from the round-robin stage.  However, only men’s singles features these repeats on consecutive days.

An Se Young will take on world #1 Tai Tzu Ying for the first time since upsetting the veteran shuttler at the 2019 Sudirman Cup, the single victory that first put the Korean teenager on the map.