Despite limited success of homegrown players in the last decade, the Denmark Open continues to be a symbol of Danish dominance, the only major tournament where the tiny European nation has remained the most successful since inception.

It is a fact that modern badminton is more of an Asian sport than being truly global.  The assembly line production of players across categories among the Asian powerhouses, and the consequent consistency of results, is yet to be matched by any country outside of the continent.

This has been the case since the early 1950s, when Malaysia ruled the roost with players like Eddy Choong and Wong Peng Soon.  The likes of Tan Joe Hok, Ferry Sonneville and the legendary Rudy Hartono ensured a dominant Indonesian presence from the late 1950s onwards while Etsuko Takenaka, Hiroe Yuki and Noriko Nakayama can be credited for putting Japan firmly on the map from the early 1970s.  Korea joined the fray in the 1980s, with their doubles teams in particular making a mark on a consistent basis.

While these countries have remained relevant over the years there has been one country that has really dominated the sport over the last four decades.  China, after its belated entry to the global stage in the early 1980s, made an immediate impact – with the likes of Zhang Ailing, Zhao Jianhua, Han Aiping, Li Lingwei and Yang Yang starting a dominance which has since managed to hold fort. 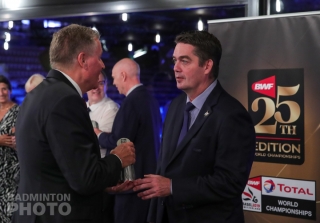 Amid this slew of Asian representation, if there is one country that has ensured the rest of the world doesn’t go unnoticed, it is Denmark.  From the 1930s until now, the tiny Scandinavian nation, of roughly six million people, has consistently punched above its weight and its players have helped keep their nation’s – and indeed Europe’s – challenge relevant.

Being competent and consistent is alright but what matters in the final analysis are results.  It is in this regard that Denmark perhaps could have done, rather can do, better.  When the results in flagship tournaments are taken into consideration, the notable results achieved by Danish players are not commensurate to the nation’s rich history.

In the Olympics, World Championships, World Tour Finals, and in the eight Open tournaments now in the Super 750 and 1000 categories, the Danish success is sporadic, not emphatic.  Only one Olympic gold medallist – incumbent BWF president Poul-Erik Hoyer (pictured above, with fellow past Denmark Open champion Erland Kops), five world champions in singles (and 10.5 across categories) and only one singles champion (among 10 Danish gold medals) at the World Tour Finals. 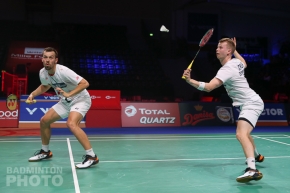 Likewise at the China Open Super 1000, held since 1986, Denmark has a total of only seven gold medals.  Jan Jorgensen (pictured below right) was the lone singles winner, in 2016, but the most recent Danish winners were Kim Astrup and Anders Skaarup Rasmussen (pictured right) in 2018.  The Indonesia Open Super 1000 has two singles champions alright, Camilla Martin winning the women’s singles in 2000 and  Jorgensen winning the men’s discipline in 2014, but the overall title count comes down to six.  Considering the latter tournament has been organized since 1982, the title count is anything but impressive.

The Danish players have over the years accumulated much better results at other Super 750 tournaments like the French Open, the Japan Open, and the Malaysian Open and in particular the All England Super 1000 but to say they have been dominant wouldn’t be an apt summation.

Amid these few good performances, interspersed with many disappointments, if there is one tournament that has been a Danish bastion, a fortress hard to breach, it has been at the home front.  The Denmark Open Super 750, held in Odense since 2007, is the only major tournament that continues to be the symbol of Danish dominance. 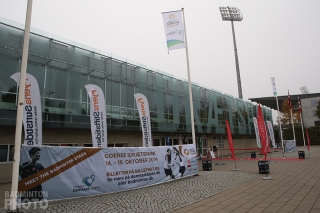 Since the inaugural edition in 1935, when Poul Nielsen and Ruth Frederiksen won the men’s and women’s singles even as the hosts swept all the five titles, the Denmark Open has been a stronghold for local champions.

There have been interruptions and distractions.  The tournament was palpably interrupted by the Second World War, and not held between 1939 and 1944.  Likewise it wasn’t held in both 1952 and 1954, and was on hiatus between 1956 through to 1964.  There have been multiple changes to the tournament’s venue as well, from Copenhagen to Aarhus and then Odense. 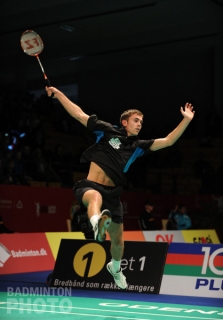 The tournament has had frequent category modification – from being a four star tournament to a five star event, from being part of the BWF Superseries Premier category (from 2011 to 2017) to being categorized as one of the five BWF World Tour Super 750 events (since 2018).  Not to forget the badminton world order has changed over the years.  However, nothing has managed to disrupt the Danish stranglehold of the tournament.

Over the years, the Denmark Open has witnessed 33 homegrown champions in the men’s singles, 26 gold medals in the women’s singles category and a total of 136 titles across the five disciplines.  For the record, China, the second most successful nation in the tournament, has a haul of 62 titles across the five competitions.  While the fact that it is less than half of the Danish score comes across as surprising, even more so is the fact that the Chinese count in the men’s and women’s singles discipline is comparatively less, at 11 and 20 respectively.

Such has been the Chinese domination of badminton since the early 1980s that the players from the country have got at par with the Danes overall total at the world’s oldest competition, the All England Championships, in half the time.  While Denmark’s haul of 88 titles, across the five disciplines in Birmingham, is an impressive figure, the fact remains that it has happened over a period of over 80 years.  China’s 85 titles have come in less than four decades.  This alone makes the Danish success in retaining their stronghold all the more commendable. 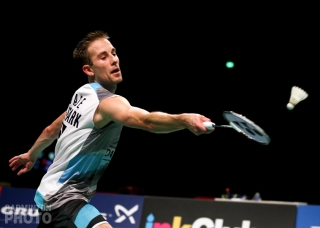 Other badminton powerhouses like Japan (25.5 titles), Indonesia (24 titles), Malaysia (19.5 titles) and Korea (19 titles) are further behind when it comes to the title count at the Denmark Open.

While the likes of Tage Madsen, Tony Olsen and Aase Schiott Jacobsen laid the foundation of the Danish success story in the tournament, winning titles across disciplines, it was the phenomenal success from the 1960s through to the late 1990s that helped consolidate the bastion.  Svend Pri won five men’s singles titles between 1965 and 1975 while Lene Koppen won as many in the women’s singles between 1974 and 1980.

The legendary Morten Frost’s eight singles titles, including seven straight from 1980 to 1986, Poul-Erik Hoyer’s six wins between 1988 and 1999 and Camilla Martin’s six women’s singles crowns from 1994 through to 2002 are part of Danish sporting folklore.  Other champion players from the country like Flemming Delfs, Peter Gade (pictured above), and Kirsten Larsen also had their names engraved on the trophy, while Barcelona Olympic bronze medallist Thomas Stuer-Lauridsen won his biggest career title at the tournament in 1996. 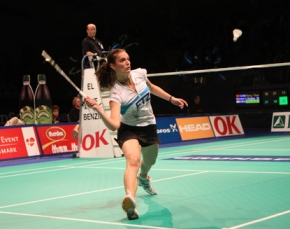 However, not all Danish greats could be successful in the biggest tournament organized in their country.  The legendary Erland Kops, who won the All England singles title seven times, never managed to win the men’s singles title at the Denmark Open.  However his contemporary, Finn Kobbero, a doubles specialist, surprisingly stood alone atop the podium in 1955.

Likewise Peter Rasmussen, who won the World Championship in 1997, could never win, while fellow World Champion Viktor Axelsen has yet to win.  Considering the reigning All England champion is still recuperating from an ankle surgery, his wait has only become longer.

Their impressive overall record in the tournament notwithstanding, home success at the Denmark Open has been sporadic at best in recent years.  In fact, 1997 was the last year when Denmark dominated in the tournament, winning four of the five titles, with only Gade coming up short against China’s Dong Jiong in the men’s singles final.

Tine Rasmussen (pictured above) was the last Danish woman to win the title in 2009, while Jorgensen, who in 2010 was the last home player to become the men’s singles champion, will retire after this edition.  Since Joachim Fischer Nielsen and Christinna Pedersen won the mixed doubles competition in 2016 (pictured top), Denmark hasn’t won in any of the five categories of the Super 750 tournament. 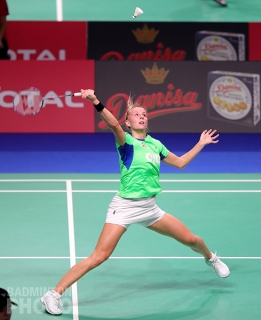 Things might change though in the coming week, when the 2020 Denmark Open is not only the first tournament since the imposition of the coronavirus-induced break, but also the last, considering the BWF has decided to move all the remaining tournaments to the next year.

After a spate of withdrawals by a majority of the world’s best players – including two-time defending champion Kento Momota of Japan – time is perhaps ripe for young Anders Antonsen (pictured bottom) to add the coveted title to his resume.  As things stand, All England finalist Chou Tien Chen seems the only in-form opposition in the 23-year-old’s path to the title, unless of course Antonsen presses the self-destruct button.

The women’s singles has a much better field, and as such there are many favourites for the title.  Besides, there is still some time before Mia Blichfeldt (pictured left), Denmark’s best bet in the women’s singles category, can be considered among the favourites.  The hosts can nonetheless be positive about their chances in the doubles competition.

Being one of the world’s oldest and most prestigious tournaments, success at the Denmark Open has gained weight over the years.  The host nation has managed to hold onto its bastion despite limited success in the last decade.  It remains to be seen, though, if Danish players can continue to add protective covers in the coming years, or watch their traditional stronghold get taken over by the marauding Asians. 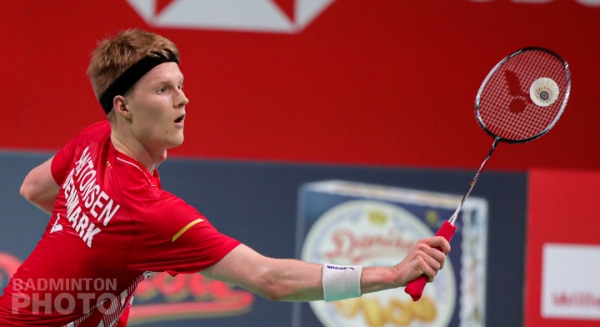