With a clutch of top level titles, a dozen gold medals in Europe, 650-plus matches and an indomitable fighting spirit, the Denmark’s Jan Ø. Jørgensen leaves behind a lasting legacy. 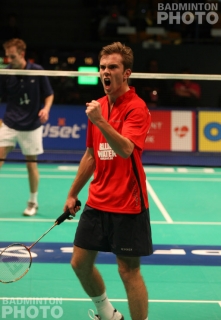 The decision had been made.  There was no looking back.  After having taken considerable time for assessment and introspection, Jan Østergaard Jørgensen had decided it was time to draw the curtain on his fairly successful career.  There couldn’t have been a better setting for the 32-year-old.

The Denmark Open Super 750 had in more ways than one been the launchpad for Jørgensen’s career.  The historic tournament had provided him with a maiden opportunity of competing at the highest level back in 2005.  It was where he had registered his first major upset – beating the top seed, defending champion and compatriot Peter Gade in the quarter-finals of the 2009 edition.  And it had been the stage for his first major triumph.  In the 2010 final Jørgensen had got the better of former Olympic and World Champion Taufik Hidayat in straight games (21-19, 21-19) to win the first big ticket tournament of his fledgling career.

Even though Jørgensen had stopped training with the national team back in June this year, he had never given up on the hope of taking to the court at the Odense Sports Park one last time.

A prolonged battle with injuries had adversely affected Jørgensen’s career, seen his playing level drop considerably in the last couple of years and pushed him well out of the top 20 in the rankings – a difficult pill to swallow for a player once ranked No.2 in the world. 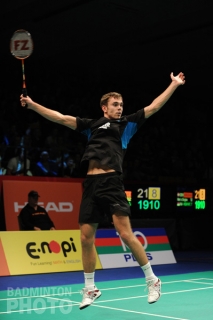 However, a spate of withdrawals caused by 2020’s biggest intimidating factor that is the novel coronavirus, ensured Jørgensen entered the final tournament of his career with certain respectability.  Despite being seeded eighth the player was his pragmatic self, and was quoted as saying before the tournament that there was absolutely no reason to set expectations.

It is another thing altogether that the 32-year-old managed to take advantage of a depleted draw, and in the final analysis exceeded expectations by making it to the quarter-finals, before losing to the eventual champion Anders Antonsen.  It is imperative to mention here that between Jørgensen’s win in 2010 and Antonsen’s triumph this year the Odense Sports Park had not witnessed any Danish man standing on top of the podium.  That’s a decade-long wait for a homegrown winner.

While Jørgensen himself had failed to repeat his 2010 title-winning feat at the Denmark Open Superseries he had used that result as a springboard to greater success.  Another Superseries title came his way at the French Open in 2013.  Then there was an impressive haul of a dozen gold medals at the European Championships, including the men’s singles title at Kazan, Russia in 2014.

However, what sets Jørgensen apart from most of his countrymen, as also the illustrious compatriots of the bygone era, is his gold medal-winning feat in three major tournaments – two individual and one team.  In each of these three tournaments, Jørgensen made history, from a Danish perspective, of course. 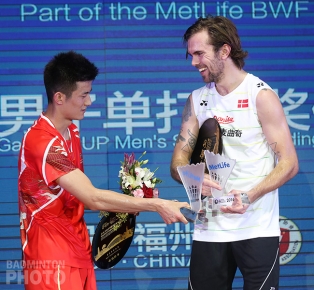 In the prestigious Indonesia Open, first played in 1982, Jørgensen is the only European player to have won the men’s singles discipline, and one of the only two non-Asian players – the other being compatriot Camilla Martin (in 2000) – to have won a singles gold medal in Jakarta.

Likewise in the equally high profile China Open – played since 1986, Jørgensen is the only European to have won the men’s singles title.  That apart the 32-year-old has also been the most consistent Danish (and European) performer in each of these two tournaments.

While Jørgensen won the Indonesia Open Superseries Premier tournament in 2014, he was also a beaten finalist in each of the two following years – losing to Kento Momota in the 2015 final and coming up short against Lee Chong Wei in 2016.

In fact 2016 was a landmark year in Jørgensen’s career in more ways than one.  Despite failing to retain his European Championship title in France, being forced to settle for a silver medal by Viktor Axelsen, Jørgensen and his compatriot joined forces in a couple of weeks time to fill what was one of the biggest voids in Danish badminton.

After being at the receiving end in eight previous finals, in a period spanning 67 years, the Denmark national badminton team finally got the monkey off their back by winning their maiden Thomas Cup title – the sport’s oldest team tournament – at the Kunshan Sports Centre in China.  Despite having lost two of his three matches ahead of the final, Jørgensen did get his act together when it mattered: he beat Indonesia’s Anthony Sinisuka Ginting in straight games, 21-17, 21-12, to give the Danes a 2-1 lead, something they would proceed to capitalize upon.

Jørgensen would build on that success and reach the final of big ticket tournaments in both Indonesia and Japan before making history again.  His 22-20, 21-13 win in the final over nemesis Chen Long – a player he managed to beat only twice in 13 meetings – made Jørgensen the first Dane, and the first European, to win a singles gold medal at the China Open.  He remains the only Dane to achieve the feat.

From losing to the legendary Lin Dan in his first major final in 2009 to finally winning the China Open Superseries Premier in 2016, Jørgensen’s career had come to a full circle.  Unfortunately for the player, the triumph also marked the onset of a gradual decline.  Blame it on the injury woes.

Jørgensen played only three tournaments in 2017.  A heel injury meant he not only had to skip many tournaments but also contemplate quitting the sport altogether.  When he finally made a comeback in February 2018, representing Denmark in the European Men’s Team Championships in Kazan, the player seemed upbeat. 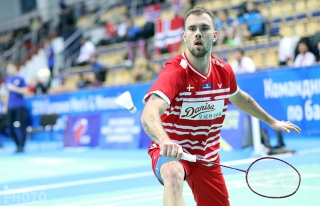 “It has been a tough ride and I’m proud again to represent my country,” Jørgensen wrote on his Instragram page.  He won all his three matches in the group phase as well as in the quarter-finals.  However, he was not required to play his scheduled matches either in the semi-finals or the final as Denmark expectedly eased to the title beforehand.

Jørgensen subsequently reached the final of the Swiss Open Super 300 – losing to India’s Sameer Verma – and won a bronze at the European Championships in Huelva, Spain, after having received a wildcard entry into the tournament.

However, things had changed considerably in the months he was away from tour.  While his body was injury ravaged, not playing regularly had significantly affected his ranking even as his opponents had added new skills to their oeuvre.  Not to forget the Badminton World Federation (BWF) had began implementing the changes to the tour that it had sanctioned a year earlier. 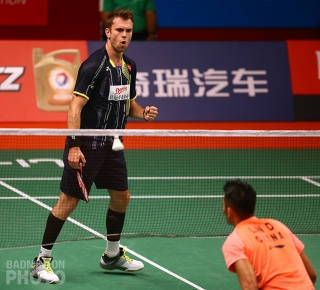 Jørgensen’s career was at the crossroads.  A career that had peaked when there were BWF Superseries tournaments still being played was being forced to restart in the era of the six-level competitions of the BWF World Tour.  The player was trying, but at over 30 years and with a battered body, he was aware of the grim reality.

“It is tough to be out for a year, even in my age.  It is a long way back, but I am enjoying the game and enjoying competing, which is the main thing,” Jørgensen was quoted as saying to the media.

However, the player found it difficult to reach the high standards that he had attained before.  Then there was the failure to add to the title tally post 2016.  Jørgensen had taken the singles matches he has featured in past the 650 mark alright, but the comeback phase was more about adding to the defeats column than accumulating wins.

There were odd moments of magic, like in the 2019 Japan Open Super 750 when he beat Lin Dan, Chou Tien Chen and promising compatriot (and 2020 Denmark Open finalist) Rasmus Gemke in back-to-back matches to reach the semi-finals, but it was obvious that the player was struggling for consistency. 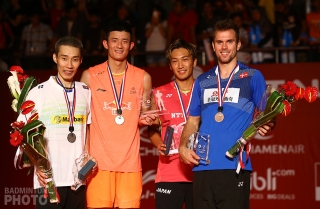 Besides, the indomitable fighting spirit that was Jørgensen’s biggest strength during the peak phase of his career had become less evident.  It is a fact that even in his best years the Svenstrup-born star could never win the prestigious All England Championships – he was a beaten finalist in 2015.  In the two Olympics he featured in – London in 2012 and Rio de Janeiro four years later – Jørgensen eased through the group stages alright but failed to cross the first hurdle in the knockout phase.

Likewise in the World Championships, Jørgensen had only one bronze to show in return for his nine attempts at the title.  In the 2015 edition in Jakarta, the Dane beat Lin Dan in straight games in the quarter-finals only to run into Lee Chong Wei.  However, despite his failure to win the most high profile of tournaments, the fact remains that during all of his best years, the Dane was one of the favourites going into the competition, and an opponent every player had respect for off the court, and doubts about seeing on the other side of the net.

As he returned from injury, the respect was intact, but the doubt had vanished.  The younger lot approached playing Jørgensen with a lot of confidence.  For a player who has an enviable 7-9 record against Lin Dan – four of those wins scored when the Chinese player was still at the peak of his career – it was a definite setback. 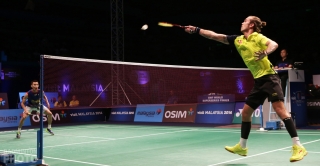 Even when playing the players he struggled against, Jørgensen’s fighting spirit was on full display.  Lee Chong Wei had an impressive 17-1 record against Jørgensen, a poor statistic by any standard.  However, delve deep into the details and it can be seen that at least half of those defeats came in affairs that went the distance.  Jørgensen was always a difficult opponent for Lee Chong Wei, a fact that the Malaysian recently acknowledged while paying his tribute to the retiring Dane.

With his desire to compete having disappeared, Jørgensen was forced to rethink.  Early exits in all four tournaments he competed in at the start of the year – Malaysia, Indonesia, Spain and All England – clearly indicated that the Dane was on the wane.  While the Covid-19 pandemic forced badminton (and other sports) to go into hibernation mode, it also provided Jørgensen time to introspect and take stock of his career, and future.

Even as the BWF decided the Denmark Open would be the first World Tour tournament after resumption – and the last for the year – Jørgensen confirmed it would be the last of his career.  Over a period of time, the player had decided he was no longer motivated to compete with the best players in the big tournaments, and it made no sense to play sans a purpose.  A decision had been made, and it was final.

While Jørgensen was palpably overwhelmed with emotions following his quarter-final defeat to Antonsen, there was also the realization that he never stood a chance.  However, with there being an all-Danish final (Antonsen vs. Gemke) in Odense there was perhaps no better time for Jørgensen to retire than to witness the next generation of Danes already up and running, possibly following in his footsteps, and adding more new chapters to the glorious history of Danish badminton. 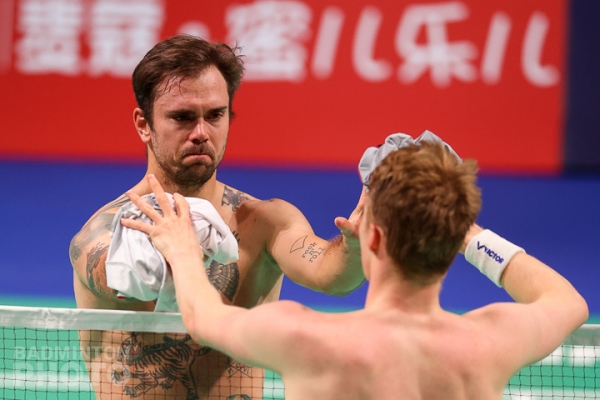