The outbreak of Covid-19 has forced the BWF to take the extraordinary measure of suspending all international badminton events for 4 weeks.

Late on Friday, the Badminton World Federation (BWF) announced that it would be suspending all international badminton events under its purview until April 12th, due to mounting concerns around the globe about the spread of the novel coronavirus Covid-19.  The decision affects four BWF World Tour events, as well as a Super 100, and several other International Challenge, International Series, and Future Series tournaments.  However, several tournament organizers had already announced the cancellation of their events, including the Singapore Open Super 500, and the Orleans Masters Super 100.  The suspension will take effect following finals day at the All England, currently in progress in Birmingham.

Regarding the All England, the BWF Press release says:

Both BWF and Badminton England have been in constant communication with government officials and relevant authorities in the United Kingdom in relation to any possible disruption to the YONEX All England Open and both parties are satisfied with the British government’s most recent advisory issued Friday morning UK time to continue with the staging of the tournament. Unless government advice changes, Badminton England remains confident that the robust and comprehensive measures in place before and during the event will minimise the potential risk of the virus. BWF duly accepts this position and that all relevant health, safety and logistical risks have been considered by BWF, Badminton England, tournament organisers, and the local government in reaching this decision.

The overall move, the announcement points out, was made because of “heightened travel and quarantine restrictions in place and the subsequent extreme logistical complications this causes to the movement of badminton athletes”, adding that, the BWF “has strong considerations for the health, safety and wellbeing of all athletes, their entourage, officials and the greater badminton community in general”. 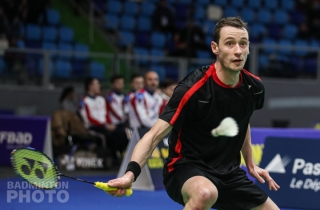 The press release goes on to say that the ramifications for qualification for the Tokyo Olympics will be explained at a later date.  As it stands now, the qualifying for the 2020 Olympics, assuming the Games will end up being staged at all, is almost completely over.  Only two weeks remain between the end of this suspension period and the end of  the qualification period.  These two weeks contain exactly one International Series, one Future Series, and the continental championships for Asia, Europe, and the Pan Am region.  The websites of the three relevant continental confederations have yet to announce any cancellations.

The only change in Olympic qualification that happened at the All England affected a player who was not there.  Maxime Moreels of Belgium, currently world #101, takes over a men’s singles spot made available by Hong Kong’s Lee Cheuk Yiu being bumped out of the top 16.  However, there is obviously increasing concern that the Tokyo Olympics themselves will need to be cancelled or postponed, making any examination of the minutia of Tokyo qualifying very low on the list of priorities.