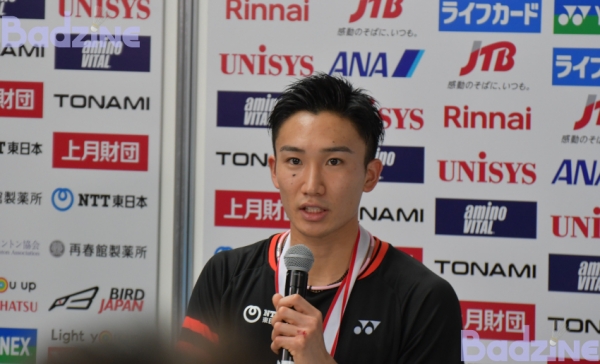 Kento Momota appeared on court last week, his first outing since the car accident in Malaysia last January but Yuta Watanabe again won twice as many national titles as the world #1.

The All Japan Championships were held in Machida City, Tokyo from December 22 to 27.  This tournament forms the basis for national team member selection for next year, including the last few tournaments in the Olympic qualification period, which is still on hold now due to the Covid-19 pandemic.  The number of confirmed cases of Covid-19 is increasing in Tokyo day by day so this tournament was held without spectators.  The Nippon Badminton Association provides the all matches via their Youtube channel or on television broadcasts.  Players had the opportunity to show Japanese fans their best performance and to prove who are the best in Japan. 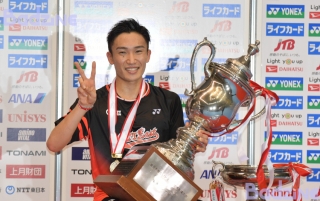 Perhaps the centre of attention at this year’s edition was once again men’s singles World #1 Kento Momota (pictured).  Three years ago, he was stopped short of the title when he was on a five-tournament winning streak internationally in his comeback from a year-long disciplinary absence.  Then in consecutive finals in 2018 and 2019, Kento got the better of Kenta Nishimoto to take his place as All Japan Champion.

This year, it was World #11 Kanta Tsuneyama who took on the now two-time World Champion on finals day but for Momota, it was again a comeback experience, but of a very different kind.  Injured in a traffic accident the morning after he won the Malaysia Masters in January, Momota was sidelined first by his injuries and recovery from surgery but then, along with the rest of the badminton world, by the pandemic, and he was unable to return in October, even as some of the top Japanese players found success at the Denmark Open.

On Sunday in Machida, Momota lead 18-15 in the first game but Tsuneyama got 6 consecutive points and won the opener 21-18.  After Momota got the second game easily, the two played a very close deciding game, even if Tsuneyama kept his lead from the beginning until 15-all.  The match had already gone over the hour mark, but Momota still had energy in reserve to increase his speed.  Momota’s footwork from the back to the net became faster and so his smash and push combination allowed him to kill the shuttle at the important point.  Finally, Momota found himself on top 21-17 as the match duration reached 80 minutes and the 26-year-old claimed his third consecutive title.

“I could play here because many people supported me,” Momota said after the match.  “I really appreciated that this tournament was held this time because of many people’s effort during this tough situation.

“I watched Tsuneyama’s matches in this tournament and he was really great so I didn’t have the confidence that I would win.  I just focused on playing my best without regret.  In the match, there were some tough moments for me but I was able to maintain my concentration on each point.  That’s why I could win today. 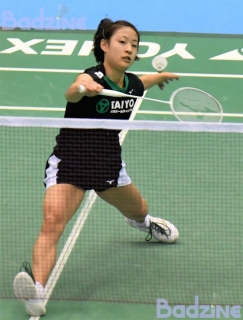 “As you know, I had a car accident this year.  In fact, I found it emotionally tough at many points this year.  But I know many people were in tough situations as they can’t live as usual so I wanted to show our good matches to the badminton fans and let the power of sports make them happy.  I feel relieved after getting the title but I’m not satisfied with my performance yet.  I will try hard to play much better,” added Momota.

Women’s singles was a match-up of players from the world’s top five.  World #3 and top seed Akane Yamaguchi got the first game but the second went to second seed and World #4 Nozomi Okuhara (pictured).  In the deciding game, Yamaguchi got out to a promising 8-2 lead but Okuhara didn’t give up and tied things up at 14.  The game was close till the end, when a smash by Okuhara touched down on Yamaguchi’s court after grazing the net.  Okuhara defended the title and racked up her 4th All Japan title in total.

Okuhara said, “Actually, I didn’t realize I got the win.  The match with Akane was always really high level.  I enjoyed the match today with the deep tactics.  I hope people enjoyed our match.  Also, I’m glad to show our high level performances in our match.  I tried to play my best on each point without giving up.  That’s why I was able to win.  I have trained my speed up on court.  I caught her trick shots today.”

“We didn’t have matches for a long time.  Finally, we could play in a tournament,” Fukushima said after the final.  “We trained hard, so I think our efforts paid off today.  We know our opponents have strong offence so we were thinking how to receive well – just do our best to return the shuttle – and we tried not to make errors in any long rallies.  At the moment of victory, the faces of people who have supported us came to my mind.  I’m really happy to show our win to the people.”

Hirota added, “I was really disappointed last year after losing the final against them so I really wanted to win this time.  I’m glad to play with our own performance in the match.  They are tall and play offensively so I tried to keep my mind strong while defending and our defense made for chances to attack if we moved quickly.  This win gave me confidence and we’ll keep going to make next year much better.” 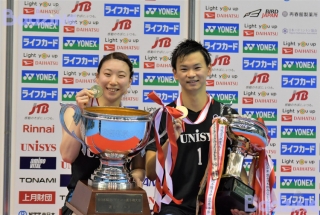 For the fourth straight year, both the first match and the last one on finals day featured the flamboyant Yuta Watanabe.  In the opener, he was on court with partner Arisa Higashino (pictured), with whom he was three-time defending mixed doubles champion.  Their opponents were Yuki Kaneko and reigning Olympic women’s doubles champion Misaki Matsutomo.  Matsutomo has changed to the mixed doubles category to get an opportunity to play in the Tokyo Olympics after her pair Ayaka Takahashi announced her retirement.  Kaneko / Matsutomo defeated some national team mixed doubles pairs and showed that their performance was already national level in Japan but Watanabe / Higashino performed well from beginning to end and won handily, in just 33 minutes.

“First of all, I want to say to thank you to all staff for this tournament being held,” Watanabe said after the match.  “I wasn’t thinking of the consecutive titles.  I just tried to play our best as the title would come to us.  I’m not sure whether the Olympics will be held next year but our goal is still to get the gold medal in the Tokyo Olympics.”

“I tried to get the 4 consecutive titles,” Higashino added.  “Before this tournament, we didn’t have any matches so we told each other we should enjoy this tournament.  Now I’m very happy.  I also had pressure before the final.  I didn’t have opportunity to play against Matsutomo in women’s doubles so I enjoyed playing with her this time.  I will try my best performance in each match and enjoy playing together.” 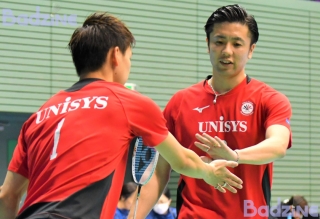 Yuta Watanabe was back on court for the last final of the day, too, as usual.  As they had back in 2017, he and Hiroyuki Endo (pictured), the world #5 duo, faced off for the men’s doubles title against world #11 Takuro Hoki / Yugo Kobayashi, who had defeated world #4  Keigo Sonoda/Takeshi Kamura in the semi-final.  Hoki/Kobayashi dictated the pace in the first game and took a good lead at 18-12 but Watanabe/Endo caught them with 8 consecutive points and won it 21-19.  Watanabe/Endo didn’t stop racking up the points in the second game.  Their tactics worked well and raced out to a commanding 15-2 lead, soon closing out the straight-game victory in short order.

“At the beginning of the match, our opponents were faster than I expected so I couldn’t get used to their speed,” said Endo, “but Watanabe’s tactics got swung the pace back to suit us and we were able to win.  We can find something good and bad in the match today so we’ll share the ideas and become much better for our future games.”

“We were in losing situation in the first game but we were able to put pressure on them when we played offensively,” Watanabe added.  “We learned we can change to better tactics even if we are in losing situation.  Our goal is to get the gold medal in the Tokyo Olympics.  The most important is to score the victories one by one in the world competitions.  We will make a fresh start and work harder from the beginning of the coming new year.”